If you’re facing a Drug Offence related investigation or prosecution, contact our experts at UK Criminal Solicitors with nationwide access including the major cities of London, Birmingham, Manchester. We are the number 1 choice to provide expert advice and legal representation anywhere in the UK. So, whatever your situation and wherever you are based, we can help you.

Types of drug offences our solicitors and lawyers can assist with.

Our specialist drug offence related solicitors and lawyers have decades of experience representing clients in relation to a wide range of drug offence charges. We can offer detailed knowledge of these complex offences and the various opportunities to avoid charges, see charges dropped or secure the minimum penalties where conviction is unavoidable.

If you are caught in physical possession of a drug you will be charged with possession. This applies even whether or not you knew the drug was a “controlled substance”, although there is a defence under section 28 Misuse of Drugs Act 1971 if you can prove that you neither knew, nor suspected nor had reason to suspect that the substance was a controlled drug. You will be charged with straightforward possession of a controlled substance if you are found to have any amount of a Class A drug, e.g. Heroin, Ecstasy, or more than a minimal quantity of a Class B or Class C drug, e.g. Cannabis.

Supplying Or Offering To Supply Drugs

These offences can be dealt with either in the Magistrates Court or the Crown Court depending upon the severity of the case and the amounts involved. The maximum sentence for this offence is life imprisonment or an unlimited fine within the Crown Court for supplying a Class A controlled substance.

Our experience has shown recently that with reduced resources, the police are targeting people who are actually supplying controlled substances as opposed to clients who have a small amount of drugs for personal use.

We have defended many cases involving the supply of controlled drugs, ranging from small amounts of cannabis, cocaine or heroin, up to huge drugs conspiracies involving large quantities of drugs and many defendants from all over the country. In many cases we have secured Not Guilty verdicts for our clients, or have persuaded judges to dismiss cases at half-time due to evidential or disclosure problems.

We are familiar with the issues arising where large drugs conspiracy cases are prosecuted. This ranges from managing the large volume of paperwork and evidence involved, to dealing with telephone billing, cell site evidence and covert policing methods.

Where all else fails we’re experienced in dealing with the sentencing process, and have often been able to obtain advantageous sentences for our clients or have sentences which were excessive reduced on appeal.

Conspiracy Solicitors have immense experience in dealing with production of controlled drugs offences, some of which have attracted extensive interest from the national media.

This offence covers the cultivation and/or manufacturing of controlled drugs, whether it be half a dozen cannabis plants in the loft or garage, or an extensive commercial grow worth thousands of pounds. You may commit the offence if you were directly or indirectly involved with the production process. Indirect involvement could be the letting out of premises for the purposes of cultivation, where you are aware that production is taking place.

Of course, it is for the Prosecution to prove that you were actively involved in some way and if they can’t do that their case should fail.

The offence is made out where:

We have dealt with many of these cases, and have, for example, been able on occasion to persuade judges to exclude important Prosecution evidence due to concerns about the manner in which police conducted searches, with the result that cases collapsed.

Production Of Controlled Substances With Intent To Supply

A separate charge of Production With Intent To Supply will apply if the prosecution can show that you have produced a controlled substance with the intention of supplying it to another. This will usually arise in circumstances where there is a large-scale commercial production.

The same issues of complexity would arise as in other large-scale drug cases. We’re experienced in dealing with these issues so if you need help, we are the right place to come.

These are very serious offences and it is important therefore that you are properly advised by a solicitor and/or a barrister at each and every stage of the investigation. We at Conspiracy Solicitors have a wealth of knowledge in all types of drugs offences.

There are many good reasons to choose our specialist drug offence solicitors and lawyers. The first is our excellent reputation as industry leaders in the area of the law, which is drug offence related.With 5-star customer rated reviews and all clients, past ans present who’ve used our services for drug related offence, all saying they would recommend us to others. As they say, word of mouth, is the best advertising you can get. Members of our criminal defence team have also been recognised by some of the top legal directories in the UK.

Our drug offence related solicitors and lawyers take a holistic, personalised approach to each and every case. We know that being arrested or facing a criminal charge can be a very distressing experience and mounting a credible defence without expert help is extremely difficult if not impossible. Our drug offence related solicitors will listen to you and offer their advice in an honest, transparent manner, explaining your options clearly. They’ll also keep you updated on your case and work tirelessly to secure the best resolution for you. 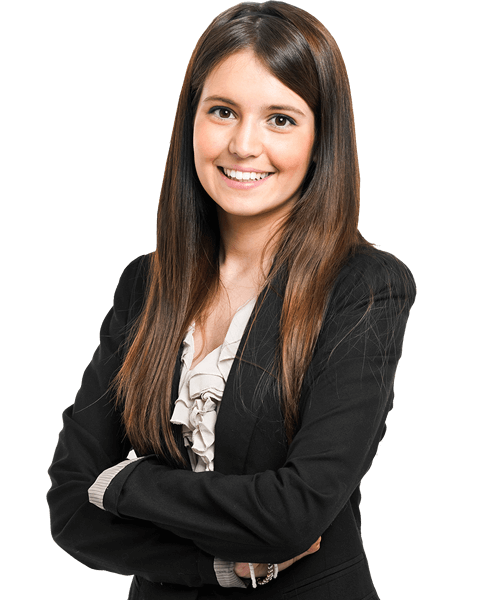 What sets UK Criminal Solicitors apart from many of the other law firms is our fixed fee pricing for drug related offences. Facing a criminal charge can be stressful enough without uncertainty over legal costs, which can happen when lawyers charge for time spent on your case. We don’t believe in that. We believe in total transparency from the start, offering a fixed fee proposal that includes details of the work to be done and how much it’ll cost. This is all explained to the client at the outset. The only exception to this rule is in rare or complex cases such as high-profile Crown Court cases. Even the everything will be explained upfront.

There’ll never be any unexpected costs further down the line. We don’t like surprises either.

Defending a drug offence charge involves a number of steps, starting with providing initial advice after a person has been arrested. This advice is crucial, as it prevents you from accidentally incriminating yourself or making a mistake that could work against you in court further down the line. At UK criminal solicitors we also:

It is crucial you call us at the earliest possible stage of any criminal proceedings. Time is of the essence.What we regard as the best criminal solicitors are waiting to help you. Call us now on 0800 061 4996 . All calls are free from landlines and Mobiles 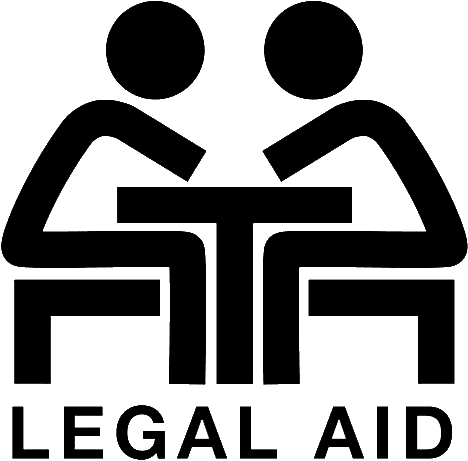 If you’ve been accused of any drug offence related crime, have been arrested or are being actively investigated by the police, it’s essential to seek expert legal representation immediately. Time is of the essence. A person who has been arrested has the right to legal representation as soon as they ask for it. Our drug offence solicitor and lawyers will uphold your legal rights from the start to ensure that you’re treated fairly and to establish the facts in the case as soon as possible.

Even if your case has progressed further than this, our drug offence specialist solicitors and lawyers can still help. It may be the case that you aren’t happy with your legal representation, or the charges against you have changed. In these circumstances. It’s always better to simply call our friendly drug offence related criminal defence solicitor team to discuss the details of your case further for expert advice you can rely on. Our criminal solicitor liaison team will clearly and honestly lay out the strategic options available to you, offering a realistic prediction of how the case will unfold and advise on how to achieve a positive outcome. We are always waiting to help.

If you’re facing investigation or prosecution, contact our experts at UK Criminal Solicitors with access in London, Birmingham, Manchester. We are the number 1 choice to provide expert advice and legal representation anywhere in the UK. So, whatever your situation and wherever you are based, we’ll be there for you.

We accept all major cards 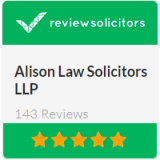 Copyright© 2020 – www.alison-law-solicitors.co.uk/www.ukcriminalsolicitors.co.uk are trading names of Alison Law Solicitors LLP the main website can be viewed at www.alison-law.co.uk, A limited Liability Partnership registered in England and Wales under number OC378803. Registered Office: Alison House, 437-441 London Road, Sheffield, S2 4HJ. Authorised and regulated by the Solicitors Regulation Authority of England and Wales with registered number 573279 and 641704. List of members and non-members who are ‘Partners’ are available at the registered office. Alison Law Solicitors logo is a registered trademark. All Rights Reserved. VAT number 157 2011 39. We do not accept documents via email or fax. 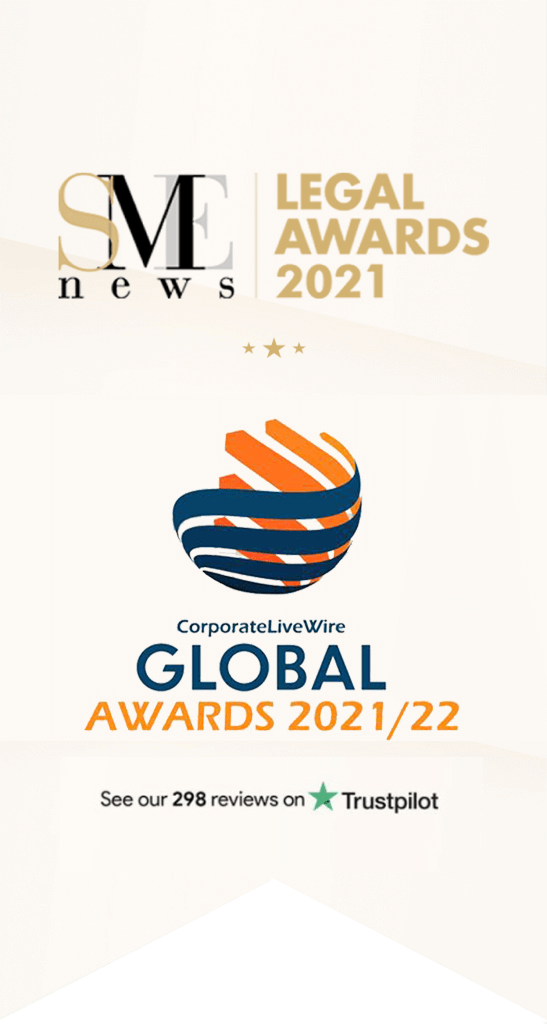 Why We Are Proud Of Our 5 Star Customer Rated Reviews

How can you be sure that you’re actually dealing with a trusted UK Criminal specialist that lives up to its reputation? You don’t rely solely on what they have to say about themselves. You rely on reviews.

These customer reviews will give you the evidence that we at UK Criminal Solicitors are treating our customers the way they deserve to be treated, by: 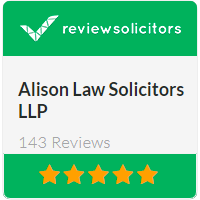 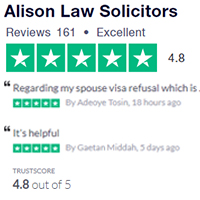